Tornadoes in the Old West and in 2013: Research, Numbers, and Remembering What's Important

I had yet another blog hacked--five total--and for a short time considered giving up on blogging, but I continued to receive comments on older stories from faithful readers who inspired me to repair the damage and keep writing. I would, however, like to send a message to the strange person(s) who gets his or her thrills from harming others: This is a place for education and communication, a place that represents the determination of our ancestors who settled the Old West, and just as the gangs and thieves in the Old West failed in their attempts to stop our ancestors, your poor manners and abusive behavior will not stop us from continuing to learn and share. 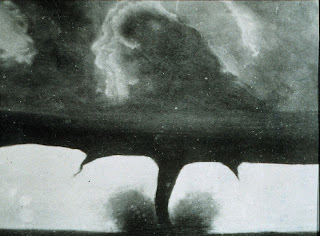 This tornado hit Howard, South Dakota on August 18, 1884 and this is also believed to be the oldest photograph taken of a tornado.

We've discussed tornadoes in the Old West once before, but the discussion showed that the topic was important to many readers, and for different reasons, so I thought I'd share more information I've found during my own quest to learn about the weather on our planet.

I was surprised to learn about the amount of research and documentation researchers found regarding tornadoes that took place in North America, details from as early as the 1500s--there is no place in the world that has as many tornadoes as the United States.

The earliest records I've found on tornadoes came from Europe. This makes sense as written records were made in Europe long before they were made in the U.S. The earliest recorded tornado in Europe struck near Kilbeggan, Ireland on April 30, 1054 and another hit London on October 23, 1091. In the Americas, it is believed that there is a record of a tornado touching down in Tlatelolco, which is now Mexico City, on August 21, 1521, just days before the city was taken by Cortes.

In fact, the word "tornado" has either a Latin, Spanish, or French origin, and not a Native American Indian origin as one might expect. I find this interesting because we have already discussed that the Native American Indians were well aware of the presence of tornadoes on the plains and the damage they cause. The Latin word for tornado is tornare, which means "to twist." The Italian word is tornear, or turn; and the French word is tornade.

It is also interesting that the deadliest tornado in the world did not take place in the United States! The deadliest tornado in world history is believed to be the Daulatpur-Salturia Tornado that struck Bangladesh on April 26, 1989 and killed approximately 1,300 people. However, as I point out later in this post, although we do know how many people were injured in tornadoes in the Old West, we do not know how many people later died from these injuries and considering the availability of medical care during those times it is possible that more than one 19th century tornado in the Old West surpassed the damages of the Bangladesh disaster.

Tornadoes in North American During the 19th Century

One of the earliest tornadoes recorded in North America struck Rehoboth, Massachusetts in August of 1671. Another hit Cambridge, Massachusetts on July 8, 1680. Using this data, we cannot assume that there were more tornadoes in this area than in the plains during this time because the movement West did not begin in force until the 1800s.

However, one of the deadliest and most destructive tornadoes in the 19th century occurred on May 6, 1840 in Louisiana and Mississippi, not in Oklahoma as one might expect. The twister touched down on the Red River about 40 miles north of Alexandria, Louisiana and moved east across Louisiana finally disappearing back into the clouds ten miles past Natchez.

According to Rod Beemer's The Deadliest Woman in the West, the tornado was two miles wide, followed the riverbanks, and caused destruction on both sides of the river as well as on the river itself. I am often asked on my weather blog if tornadoes touch down near rivers. Yes, tornadoes do touch down near and on rivers. They also touch down on mountains and hillsides. In fact, just last week there was a tornado on Pikes Peak Mountain in Colorado!

When the Natchez tornado struck the river in 1840 the effects were both shocking and deadly. According to witnesses to the Natchez tornado, the Natchez River rose six feet in places and as much as 20 feet in other areas. The tornado sank between 50 and 60 flatboats killing all crew members on board. Reports that the steamboat Hinds also sank to the bottom of the river proved to be untrue as the ship arrived in Baton Rouge two weeks later, floating eerily into port. Fifty one bodies were removed from its wreckage.

It is believed that more than 200 slaves died working the fields in Louisiana, but there is no accurate accounting. An additional 48 slaves were killed in Natchez, Mississippi. A preliminary count of casualties along the Mississippi River alone came to 269. 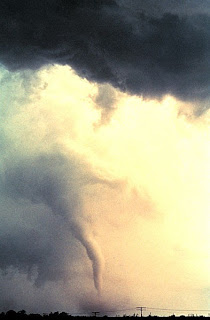 When reviewing Grazulis' data on tornadoes in the 19th century it is important to keep in mind that many plains states were still considered "territories," and Texas was a separate country for ten years. Nevertheless, the data provided by Grazulis' research should be a bit of a surprise to those who insist that global warming is the cause of North American tornado activity.

The Lasting Trauma of Tornadoes

Flora Snowden's 1953 book Tornadoes of the United States tells a rather sad story of the fear created by tornadoes. According to Snowden, the series of storms that hit Kansas, Nebraska, Missouri and Iowa on May 29 and 30, 1879, traumatized some residents so deeply that they never recovered, particularly residents of Irving, Kansas, which was struck by two tornadoes minutes apart. Snowden reports of residents who could not sleep for years after the storms, lying awake at night, listening to the wind. 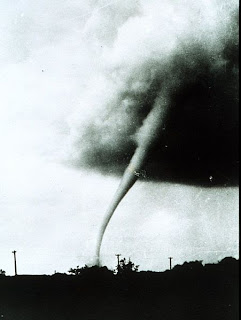 In his books, Meteorologist Thomas P. Grazulis also tells the story of a man who owned a farm in Rodman, Iowa. The farm was completely destroyed by a tornado on June 13, 1899 and the man became "a living madman" due to the trauma of his loss.

He also tells a gruesome story of a tornado that struck St. Louis, Louisiana on May 17, 1896. The St. Louis Hospital was in the direct path of this tornado creating a situation oddly similar to the one that occurred when an EF5 tornado with 200 mph winds hit St. John's Regional Medical Center in Joplin, Missouri on May 27, 2011. The tornado that struck St. Louis in 1896 destroyed the city, but took more than lives and property. It stole the sanity from many of the residents, as well. 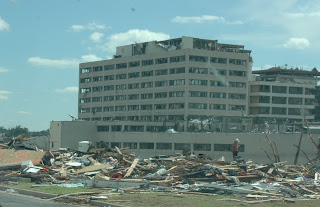 Damage to St. John's Hospital. Photograph taken after tornado struck Joplin, Missouri on May 27, 2011. Photo in Public Domain, donated by Intelati.
The walls, roof, and ceilings crumbled at the hospital and many of the 416 patients received additional injuries. Two patients were killed, but three more died during the night from emotional trauma. According to Grazulis, elderly patient Jean d'Archimbault was so crazed with fear that he climbed over a crumbling wall after the tornado passed and ran 30 feet on his one remaining leg. The other leg had been amputated just hours before. Before he could be rescued, he died from shock. Two more elderly patients died inside the hospital from "fear," or the shock of watching the walls crumble around them.

In the news, we often read of the number of people who die or are injured in tornadoes, but these reports rarely mention the lasting effects of surviving a tornado. On May 22, 2008, I spent three hours in a basement closet in Loveland, Colorado clinging to my three-year-old granddaughter as tornado warnings repeatedly flashed across the television screen, then we lost all power. A few minutes later a mile wide EF3 tornado struck Windsor, Colorado on the opposite side of the highway. 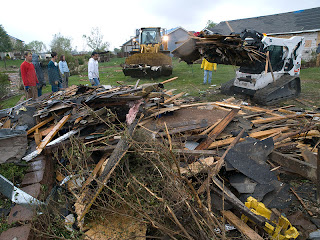 Volunteers help clean up debris in Windsor, Colorado after the May 22, 2008 tornado. Photo taken by FEMA employee/Public Domain.

The tornado killed one man, injured 14 others, and caused $3 million in damages. It struck a daycare center head on, but miraculously left the children and teachers with minor injuries. I doubt it is a moment they will ever forget. I know I will never forget that day, and my granddaughter, though she was only three, still remembers the hours we spent in what she called the "boom boom closet."

On May 15-17, 2013, a deadly tornado outbreak struck Texas, Oklahoma, Alabama and Louisiana. One day later, on May 18, another outbreak lasting until May 21, 2013 hit the American Midwest.  On May 20, an EF5 tornado hit the town of Moore, Oklahoma. Sadly, two elementary schools lay in its path and seven children were killed. Then, on May 31, 2013, an EF5 tornado that was 2.6 miles wide--the widest tornado in recorded history--hit El Reno in rural Oklahoma. Three storm chasers were killed while trying to gather data.


The El Reno, Oklahoma EF5 tornado photographed east of South Banner Road and SW 15th Street on May 31, 2013 by Nick Nolte.
This is not something we think about when we talk about the number of people who were killed and injured--the number of people suffering still, to this day, from the horrible loss of their children, family members, homes, pets. 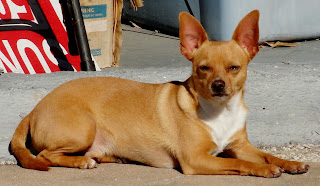 My chihuahua, Chewy. We have four dogs a cat and a rabbit. Protecting them during a tornado would be a nightmare, but living without them would be painful beyond words.

These tornadoes touched down near the town of one of my dear friends who quickly gathered emergency supplies and filled her van with volunteers to travel to the town and assist the victims. When we talk about tornadoes, about the numbers who die and millions of dollars lost, I think it's also important to remember the suffering of those who survived, and the saints who arrive on the scene to ease their pain by helping with cleaning, locating animals, bringing food, clean water, supplies. Thank God for volunteers. It is difficult, painful work, but you are appreciated.