The Undertaker: Death and Dying in the Old West 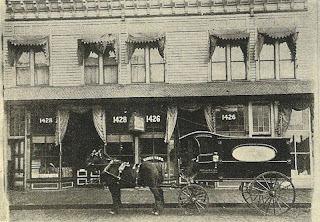 The Undertaker is a career that came into being when towns were created. Traveling pioneers buried their family members near the place of their death then continued on their way--there just wasn't time to stay and mourn the death of a loved one. Pioneers left the east and headed west as quickly as possible to avoid snowstorms. They also buried the dead quickly because, in the early to mid-1800s there was no known way of preserving bodies, and the human body rapidly decays.

In "Grim Reaper, Roger McGrath, author of Gunfighters, Highwaymen and Vigilantes, explains that it wasn't just violence that sent settlers to their graves. "It was a very harsh environment, with scorching deserts and dehydration," he explains. Unfortunately, living in town did not guarantee medical care or a proper burial. Doctors were few and far between in the American West. 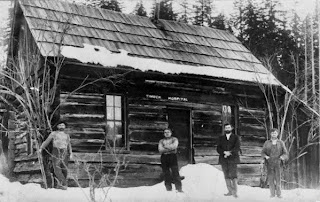 Hospital at Timber, Oregan, 1910. Photo by Gerald W. Williams.
Posted on the Facebook page Building in the Past.

According to Greystone Television's "Western Towns," poor sanitation in Western towns and the general way of life of early settlers tended to breed typhoid, diphtheria, and every other disease one could imagine. In the early years of a town's growth the local drugstore owners were considered the "doctor," though they generally only provided cheap remedies heavily laced with alcohol or opium.

Drew Gomber of the Hubbard Museum of the American West in Ruidoso Downs, New Mexico explains in "Western Towns," that "Medical technologies in the Old West were always kind of scary, actually." Gomber said gunshot wounds were even more painful if the victim survived. He tells the story of Tombstone, Arizona's Dr. Goodfellow, who was known as a gunshot specialist...Frequently the victims died of shock. Even more frequently they died of blood poisoning." Many doctors used alcohol or became addicted to their own opium and laudanum supplies to cope with the depressing atmosphere.

The job of the town Undertaker was not easy, and I'm certain it is still a difficult, painful task to this day. In the days of the Old West, however, many towns didn't have an Undertaker. Notice the storefront in this photo? According to Wild West Tech's "Grim Reaper," most undertakers were furniture makers or doctors doing double duty. I wondered why it was so difficult to find undertaker signs for this post! It is logical to assume that the townsfolk would turn to someone who already had the tools and wood available to make their coffins.

Preserving the bodies was relatively new technology in the 1800s according to Wild West Tech's "Grim Reaper." The bodies were first soaked in arsenic or alcohol, about three pounds per body. There are stories of family members who were preserved in a barrel of whiskey until they could be "properly" buried.

"Grim Reaper" also tells the story of a woman who preserved her husband's body in a tin casket filled with whiskey. She kept the casket beneath her bed for several months then sent it by train to Illinois for a spring burial.

The American Civil War and Formaldehyde

Qualified doctors became more common in towns after the American Civil War, bringing with them advancements in medical knowledge, technology, and surgical techniques acquired on the battlefield, though the surgical techniques still often meant a delayed death.

Nevertheless, the business of burial became more important during the American Civil War, particularly when wealthy men or officers died and their bodies were preserved to be returned to their family homes for burial. Medical professionals searched for new ways to preserve bodies of soldiers until they could be returned to their home states.

Formaldehyde Turns Death into a Business

Formaldehyde was actually discovered in 1859 by a Russian chemist, Aleksandr Butlerov, in 1859. Formaldehyde made the preservation of bodies for anyone possible, regardless of their wealth or social status.

Not surprisingly, Formaldehyde, a gas that is dissolved in water, also has an alcohol base. It stabilizes the bacteria that invade flesh, muscle, and tissue, and body organs causing the decay of the human body. Unfortunately, embalming fluid was also dangerous for the Undertaker. Exposure to Formaldehyde can cause lung cancer, bronchitis, or even death.

The invention of Formaldehyde was important to the business of the Undertaker. In fact, you could say it made their business a business. It certainly made it far more profitable. By postponing the decay of the body, families could wait longer to bury the deceased until other family members arrived to say their last farewell. This opened new opportunities for elaborate funerals and created a booming business for the Undertaker.

One could say Formaldehyde was the spark that created the opportunity for Undertakers to create a thriving business out of what once was just a job they were unwilling thrust into because no one else was available. It was still a sad, morbid business, but finally, a profitable one. 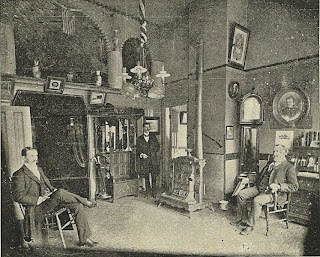 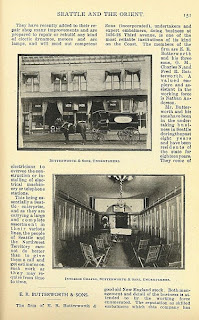 Makes you wonder which was more of a challenge: Having to face a drunken gunslinger...or yelling for "Doc".
"Luadanum" seemed popular as well, being mentioned both in the movies "Tombstone" and "Wyatt Earp". It was an "inexpensive " painkiller that was a mixture of opium and alcohol...at least that is what I understand, and obviously addictive. It is written in some historical articles That Abraham Lincoln's wife was addicted to the painkiller.
As far as the undertakers...I guess I would hope I was truly dead before these guys started their procedures...scary stuff. Thanks Darla

Sadly, Laudanum was mentioned in those films because they were trying to be historically accurate. Women in the 1800s were often addicted to Laudanum and as shown in this films, carried it in their purses as we might now carry Benadryl for a child allergic to bees. They wouldn't leave home without it, as the saying goes. It was available at all local pharmacies and without a prescription, recommended by doctors for everything from headaches to menstrual cramps. It was even given to children. Drugs in the 1800s would make another interesting post. It is shocking how many people were addicted to drugs.