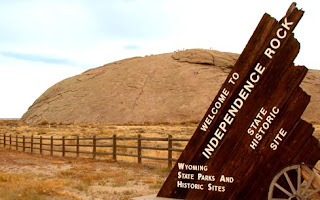 Yes folks, it's true. Those silly webpages claiming graffiti started in the 1960s are wrong. Long before it became a popular form of entertainment and vandalism for bored teenagers, America's pioneers were carving their names in a giant rock in Wyoming, the halfway point to their destination: California. As early pioneers made their way across the continent to settle the West, they often stopped at this well-known landmark to leave their mark on history.
The rock is now a Wyoming State Historic Site.

The Oregon Trail's Sweetwater River, circa 1870.

Pioneers making their way along the Oregon Trail to California often traveled alongside the Sweetwater River in Wyoming. They began to notice there were many choice campsites near the river, opportunities for game and fish, fresh water, and a nice place to rest.

These same pioneers also noticed a large rock, perfect for climbing to get a better view of what lay ahead, and what they'd left behind. 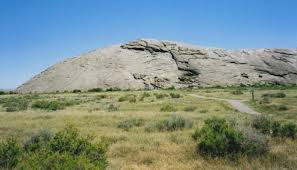 From the top of the rock it seemed a pioneer could see all the way to California, and after what they'd just experienced, those few moments on the rock were like a slice of Heaven!

Traveling the Oregon Trail involved careful planning to avoid harsh weather. Pioneers had to arrive in Independence, Missouri, buy their supplies, join a wagon train and start on the Oregon Trail in plenty of time to reach Wyoming by July. 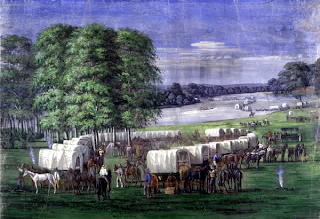 According to Huston Horn's The Pioneers, Phoebe Judson wrote in her journal that she celebrated the Fourth of July at Independence Rock with her family in 1853. They "whipped up a savory pie made of sage hen and rabbit, with a rich gravy; and a crust, having been raised with yeast, was as light as a feather."

The family then finished their Independence Day celebration at the Rock with fruitcake, pound cake, and sponge cake. Judson commented that the celebration would have been much more lavish at home, but considering what they'd been through in their travels, she was perfectly content.

In 1841, a missionary passing through Wyoming noticed the rock when he stopped at the Sweetwater River to rest. He examined the rock and the many names already carved into its sides. He called the rock "The Great Record of the Desert." 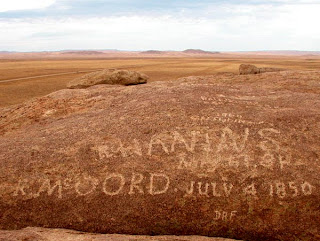 Independence Rock--note the date carved into the side. Photo by Matthew Trump. 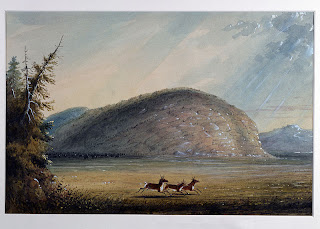 Independence Rock is made of granite and is approximately 130 feet high, 1900 feet long and 850 feet wide. Travelers often reached the rock at night. They knew they were in the right place--if the skies were clear they could see the rock from a great distance and it served as an important landmark for travelers.

Independence Rock is in southwestern Natrona County in Wyoming. You will find it alongside the Wyoming State Highway 220. It was designated a National Historic Landmark on January 20, 1961 and is now part of the Independence Rock State Historic Site, which is owned and operated by the state of Wyoming. In other words, don't show up with your pink and purple paint expecting to leave your mark--it is now an important part of American history and protected by the State of Wyoming.