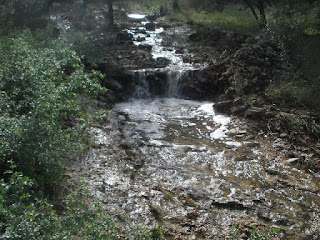 
Sad to say, I am intimately familiar with floods. When my husband and I first traveled to Texas in June of 2007 we spent three days looking for a home. We signed a contract on a beautiful, circular hillside house and started on the drive back. When we reached Oklahoma, my daughter called. "The town you are moving to is flooded!" she said. We turned to the news on the radio. Sure enough, Marble Falls, Texas was flooding. Marble Falls received 18 inches of rain in a few hours causing massive flooding and 11 deaths. My oldest son was almost swept away in the June, 1997 Spring Creek flood in Fort Collins, Colorado. Details regarding emergency responses to that flood are now used in flash flood training films for emergency responders. 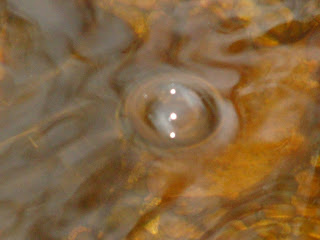 Bubble in the flood. Photo by Darla Sue Dollman.

Colorado has had more than its share of catastrophic flash floods. In fact, one of Colorado's first documented flash floods occurred on May 20, 1864 in Denver City and Auraria. Denver City and Auraria, struggling and competing mining towns, were perched on opposite banks of the Cherry Creek, but they had one thing other mining town's lacked, one thing that bonded the two towns together in a way that eventually caused them to merge--a stubborn and determined newspaper editor named William Newton Byers. 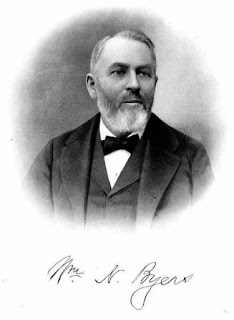 William Newton Byers produced his first copy of the Rocky Mountain News on April 23, 1859. He has worked through the night beneath a sagging tarp used to keep the snow falling through holes in the roof off his press. Byers was trying to beat another editor, Jack Merrick, who was set to publish the maiden issue of his newspaper, Cherry Creek Pioneer, on that same day. Byers beat Merrick with the first Denver newspaper copy by 20 minutes and Merrick sold Byers his equipment to join the hoards of prospectors heading west in search of gold in the Colorado Rocky Mountains.

In addition to his determination, Byers also had faith, faith in himself and the city. When the gold dried up and disappointed prospectors loaded their equipment to return home, Byers insisted the city would survive and used his newspaper to taunt those who moved on, calling them "Gobacks!" Byers was right. The city prospered, and Byer's Rocky Mountain News survived, as well.

The Denver City/Auraria flood followed the typical Southwest pattern of drought followed by flood, and there is a logical reason why this pattern leads to flash floods. When a drought occurs the plants die and there are no trees, grass, weeds--roots--to absorb and hold the rain when the drought eases.

In 1862 and 1863, Colorado experienced a severe drought and strong spring winds raged down the mountains in early 1863, increasing the fire danger. According to Keith Wheeler's The Townsmen, at 3 a.m. on April 19, 1863 a heavily intoxicated man stumbled into the Cherokee Hotel and kicked over the wood-burning stove. The wind fed the flames that jumped from building to building for three hours transforming the main business section of the city into a pile of ash and rubble with damages totalling $350,000--a lot of money in 1863! The fire was not, however, enough to stop the proud, determined people of Denver who quickly rebuilt their town while young boys in the neighborhood picked through the rubble, searching for nails they could straighten, making as much as $10 a day selling the nails to those performing the reconstruction.

In 1864, the rains returned to Colorado with a vengeance. Day after day, massive thunderheads rolled across Colorado's Front Range filling the lakes, streams, ditches, and thirsty soil with rain until the entire area was so saturated it could no longer absorb one more drop. Denver received average rainfall and the people of the city were unprepared for what was to come.

On May 20, 1864, a wall of water barreled down Cherry Creek and smashed into Denver City and Auraria. The wall of water was filled with trees, brush, broken furniture, and human bodies. It crashed into the Rocky Mountain News building, which Byers had built in the middle of the creek on stilts in an attempt to show his loyalty to both competing towns. The flood waters shredded the structure like scissors on paper, destroying the 3000 pound steam-powered press William Byers brought with him from the East.

At the time of the flood, William Byers was at home with his wife and family. They were rescued by boat from the roof of their home by Byer's friend, Major John Chivington who later led the infamous Sand Creek Massacre, killing 163 Cheyenne women and children.

The estimated damages from the flood of 1864 was over a million dollars and 20 people lost their lives. Nevertheless, the City of Denver survived, just as Byers predicted, and once again, William Newton Byers and the Rocky Mountain News survived. Byers had steadily invested in other ventures over the years and used his financial gains to purchase a competitor's operation. The Rocky Mountain News continued to provide news to the people of Denver until February 27, 2009, when the last edition went to press and the newspaper closed its doors forever.
at January 18, 2016 2 comments: