The boots they wore... 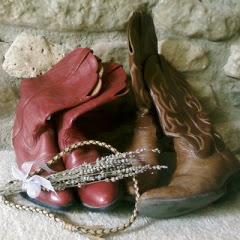 Part of my personal collection of boots. Photo by D.S. Dollman.

That's right, I have a few more words on cowboy boots, as if one could ever say enough about them! Although contemporary cowboy boots come in a wide variety of styles and colors, for working cowboys, they are so much more than a fashion statement and should be considered safety and survival gear. (Please be patient as I continue to repair my blogs that were once again hacked and all photos and sources removed).

After months on the dusty trail following the behinds of cattle, the first thought on the cowboy’s mind when he received his pay was a hot bath and clean clothes. Women, drinking, rough-housing—these would all come later. First, the cowboy needed to track down the proper attire, and proper attire included cowboy boots.

Most cow towns had a boot store with first-rate, custom made boots. Although they were available, according to Russell Freedman's Cowboys of the West, only the poorest cowboys wore ready-made boots. According to "The Real McCoy," part of The History Channel's Cowboys and Outlaws television series, one Abilene boot maker in the late 1800s hired 20 employees so he could keep up with the demand for boots when the cowboys hit town. His boots cost around $20 a pair in the mid to late 1800s, which would have a contemporary equivalence of $300. In the Time Life Books Series The Old West: The Cowboys, William H. Forbis states that cowboys were willing to pay $50 a pair for their boots, or about two month's wages.

Tony Lama, a US based corporation selling one of the most popular brands of ready-made western boots, was named for its founder who lived from 1887 to 1974. Lama learned his craft while serving as a cobbler for the US Army stationed at Fort Bliss, Texas. He opened his first shoe repair shop in downtown El Paso in 1912, according to the Texas State Historical Association. Lama's business skyrocketed during the 1930s with the popularity of cowboys such as Tom Nix and Gene Autry.

The leather on a cowboy boot was the finest, softest leather with an abundance of fancy stitching. The leather reached as high up the leg as comfortably possible to protect the cowboy’s ankles and legs from thorns and snake bites. The length also kept out rocks and pebbles, or for New Mexico cowboys, sand. According to Forbis, cowboys in the 1800s preferred a snug fit, yet another reason why they had their boots custom-made. They also tried to make their feet look as small as possible as big-footed cowboys were believed to be clumsy.

At the top of the boot there were--and still are--two flaps called mule ears, which are used to help the cowboy pull the boot over the foot and onto the leg. As discussed earlier in the post on cowboy attire, most cowboys tucked their pants into the boots to help keep the sand and pebbles out and protect clothing from snagging on the brush. The toes were pointed so they fit easily into the stirrups. The pointed toe was also important as it allowed the cowboy to quickly slip his foot from the stirrup if he was thrown from the horse, particularly during a cattle stampede when the risk of being thrown and trampled, or dragged to death, was high--according to Forbis, one of the leading causes of death among cowboys was being dragged to death behind the cowboy's horse when the boot was caught in the stirrup.

Short heels were required to hook the boots onto the stirrups and keep them from slipping out during the ride. The sole of the boot was thinner so the cowboy could feel his boots in the stirrups and know his feet were secure. Heels angled in the back are called buckaroo style. Roper boots have square, short heels. 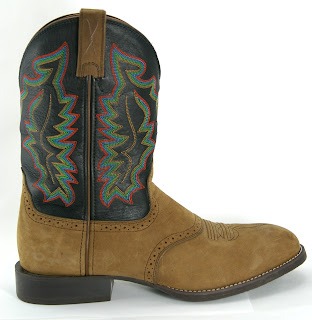 In The Cowboys, Forbis also explains the four different styles of cowboy boots worn during the 1800s. The earliest style of boots had the pointed toes and short heels, but no mule ears. The next style had a raised arch and stitching up the sides. Mule ears were added, most likely when an enterprising boot maker noticed cowboys struggling to pull the boots over their feet. The fancy boot came last, with a raised arch, slightly higher heel, intricate stitching and longer length.

Contemporary cowboy boots match design with purpose. Working boots tend to be of uniform color with less fancy stitching. Dancing or dress boots might be a bit fancier. A quick look at boot stores reveals cowgirl boots with intricate stitching showing flowers and vines climbing the length of the boot, or with pink trim around the leg and tan, suede shoe, or even multiple colors on the toe and at the top of the leg.

A popular style in Texas has boots made with the famed Texas star stitched onto the front, sides, or back. Snakeskin or imitation snakeskin boots have been popular for many years. Alligator boots are also popular. Although boots made from the skin of exotic animals may be popular as show boots, most working cowboys still prefer old-fashioned cow leather. Whatever the color, style or cost, one thing is certain--you'll never find a cowboy who doesn't own boots!

Some very good information here. It reminds me of that scene in the beginning of "Forrest Gump" where Forrest looks at that lady sitting on the bench and says, "Those look like comfortable shoes." Then he goes on to say that his momma told him that you can tell a person just by looking at his shoes: where's he's been, what he does for a living, etc.

I will tell you what cowboy boots are NOT good for: hitchhiking. I wore a pair of cowboy boots for a month and that was it. I remember I had to walk all over Des Moines, Iowa in cowboy boots and then finally I got a ride to Ames. Cowboy boots are for riding horses--NOT for walking around with a backpack.

Years ago, someone told me that rodeo cowboys will take a brand new pair of boots and cut slits down the sides so that they can be put on more easily.

I have three pairs of cowboy boots in red, green and black, and I love them, but I have also found that they're best for dancing for a few hours, or mucking around in the field with horses, or horseback riding. Definitely not meant for foot travel! :-)

I have ten pair of cowboy boots. Seven are exotics while one is nice pair of leather and two are roper style leather for work and everyday wear if needed. I live in Texas, but my favorite hats have the Montana brims. It is also called a Gus hat. They all work for me. <><

I'm down to two pair of cowboy boots. I'd like to get a pair of dress boots, something I can wear to a nice event. It surprises me how often cowboy boot styles change. When I was in Texas in 2007 hot pink boots were the popular color for women, or boots with pink trim!