Haunted Cheesman Park in Denver: Built on the Graves of Arapaho Indians and Denver's Pioneer Families 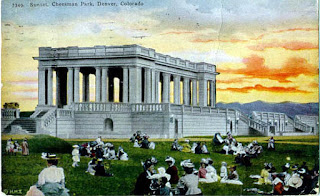 Period postcard of the Cheesman Memorial Pavilion in Cheesman Park, Denver, Colorado. Wikimedia/Public Domain
Cheesman Park in Denver, Colorado is haunted. There is little doubt, and good reason--it is located on the first cemetery created in Denver City, which was also built on top of an ancient Arapaho burial ground. In fact, the story of Cheesman Park could easily be the model for Steven Spielberg's 1982 Oscar-nominated film Poltergeist with Craig T. Nelson shouting "You moved the cemetery, but you left the bodies, didn't you?" 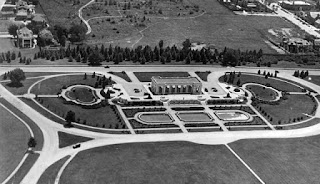 Aerial photograph of Cheesman Park, ca. 1908. Wikimedia Commons/Public Domain.
The morbid history of Cheesman Park explains the hauntings. According to the Denver Public Library's history of Denver area cemeteries, Cheesman Park was the first organized cemetery in Denver. The cemetery grounds were selected by William Larimer and William Clancey in 1859. At this time, Denver was still part of the Kansas Territory, and the Kansas Territorial Legislature granted a charter for the cemetery on February 27, 1860. The site chosen for the cemetery was once an Arapahoe burial ground. The bodies were not moved from the original burial ground to make room for the new cemetery.

Mount Prospect was divided into separate sections to honor those of different religious beliefs. There was a section for Roman Catholic burials called Mount Calvary and a Jewish section called the Hebrew Burying and Prayer Ground. There was a Masonic and Improved Order of Odd Fellows. In addition, there was a section of Mount Prospect--later called Prospect Hill or City Cemetery--set aside for the Chinese residents, the poor, and members of a Civil War Union veterans organization.

After many years, the cemetery began to look rather shabby. According to the History of Cheesman Park, in 1870, the US Land Office determined that the cemetery's location was federal property and in 1872 the Land Office sold the property to the City of Denver. Clever Land Office! In 1890, the US Congress decided the graves, and bodies, should be moved to build a park, a park that would be named "Congress Park," of course.

Undertaker E.P. McGovern (the lowest bidder) was awarded a contract instructing him to remove the remains of the early residents of the cemetery and transfer them to the Riverside Cemetery. McGovern was to be paid $1.90 for each body he moved, but he discovered greater profits could be made by hacking up the bodies and bones and stuffing the remains into child-sized caskets rather than caskets made for adults, and sometimes using the same casket for more than one body.

According to one of my favorite websites, Legends of America, the task began on March 14, 1893, and in order to meet the time constraints of the contract, McGovern's crew often left body parts lying on city sidewalks and park grounds. Graves were looted, jewels were stolen, and the people of Denver were appalled and disgusted by what they saw, particularly when reporters and photographers from the Denver Republican Newspaper interviewed residents and photographed the bones on the sidewalks for a March 19, 1893 article titled "The Work of Ghouls!" The article also showed workers hacking up bodies, ripping clothing, and walking on remains while they did their work. The situation was quickly brought under control and one year later, work began to convert the cemetery into a park.

According to Keith Wheeler's The Townsmen (which provides an excellent, detailed description of the history of Denver) Walter Scott Cheesman was a real estate and railroad baron, but in his times, he was known for his work in organizing Denver's water supply, a very important task when establishing a city. Cheesman was a popular and generous man who was known for his concern for the people of Denver, and I must say, it is a shame that this wonderful man's name is forever associated with the morbid deeds that took place in the construction of the park. When Cheesman died in 1907, he was buried in Fairmount Cemetery near what was then known as Congress Park. His wife and daughter donated a pavilion in his honor to the City of Denver with the agreement that the name of a large portion of Congress Park should be renamed Cheesman Park.

There have been many reports of hauntings and ghost investigations at Cheesman Park, but the most famous involves the 1980 film The Changeling, starring George C. Scott, which is considered one of the scariest movies of all times (by me, at least!) due to the fact that many of the incidents used in the film are based on true events. The film was written by scriptwriter and television music arranger Russell Hunter, who lived for a short time in the Henry Treat Rogers Mansion at 1739 East 13th Avenue. The mansion was on the north edge of Cheesman Park and has now been replaced by condominiums.

In an October 26, 1986 interview with reporter Frances Melrose of The Rocky Mountain News, Hunter explained that he had originally rented the mansion for $200--he was told no one else wanted to live in the building, which explained the low price. Within a week of moving in, Hunter was awakened by strange sounds coming from the bedroom fireplace. He witnessed doors opening and closing on their own, and paintings that would fall to the floor for no apparent reason. He was told by a stranger that his house was inhabited by a poltergeist. He then met another stranger at a party who told him there was a third floor in the mansion that was blocked off, and Hunter could reach this floor through a second-floor closet. Hunter claimed he found the closet and a stairway leading to the third floor, which had a child's clothing trunk and the diary of a 9-year-old boy that partially explained the haunting.

These events are also shown in the film. According to the diary the boy was crippled and his family locked him up on the third floor because they were ashamed of him. He died on the third floor. After he read the diary, Hunter held a seance in the home and learned that the boy's favorite toy was a red ball, which also began to appear in the house, witnessed by many people. The seance revealed even more disturbing information--the child had been replaced by the family with an adopted child so they could collect the boy's inheritance. The medium conducting the seance said that the child was buried in the home and his body would be found beneath a gold medal that had his name and birthdate on it. The medal was found, but not the body, and the disturbing events continued until the building was destroyed.

The story does not end here. In November of 2010, workers on the Cheesman Park irrigation system found even more skeletons that remained from the original cemetery. According to a November 1, 2010 ABC News article titled "Skeletons From Old Cemetery Unearthed In Cheesman Park", workers found four more bodies that were never moved. No wonder there are so many reports of hauntings!
at May 07, 2012

Excellent read. I always wondered how many places all around the world are truly haunted. I don't think we can explain everything that happens just with science...there is the macabre!
I am in Penang, Malaysia right now and it is good stories of back home.

Another good read, looks to me like even way back then greed had no boundaries!

True, and so sad. I cannot imagine what the people of Denver must have felt when they realized their ancestors remains were treated that way. Probably the same way the Arapaho felt when their ancestral burial ground was taken over.

Nigel, I often wonder the same thing about haunted places and the way they are viewed in different parts of the world. In the US, it seems so many people find hauntings exciting and interesting, but at the same time, they refuse to admit they believe in ghosts. In other world cultures, ghosts are an accepted part of society.

This is an excellent blog! Really got me there! Have you thought about trying to sell this to a magazine or local newspaper? I know it might seem a grizzly thing to do, profiting from such a horrific story, but maybe you could make a small donation to charity with your fee? I think there would be a real market for this piece. Well done and I'm off to read some more of your blogs!

Seeing the bodies in the streets must have been horrifying! Have you seen the pictures form the "Work of Ghouls" Article?

Yes, I have. I read the article. I considered tracking down the photos for this blog post, then I thought that might be too morbid. You would be surprised by how sensationalist reporters were back then, but in this case, they did an excellent job of exposing a horrific situation. If I can track down the article I will post a link.

Cool! I love haunted places!! I will have to check out that website!