Fulfilling a Prophecy: Return of the Catalina Buffalo

I have an article in the Fall/Winter issue of Dezert Magazine called "Fulfilling a Prophecy: Return of the Catalina Buffalo."

In 1924, 14 buffalo were transported to Catalina Island off the coast of California for the filming of The Vanishing American by Zane Grey. The buffalo were left on the island and reproduced prolifically over the years, but they were much smaller than other buffalo due to the difference in their reproduction cycle caused by the change in seasons on the island.

There was a prophecy among the Lakota that the Little Buffalo would some day be returned to the reservation. In 2009, the Catalina Island Conservancy teamed up with the Morongo Band of Mission Indians, the Tongva Tribe of Southern California, In Defense of Animals, and the Rosebud Indian Reservation to return 100 of the Catalina "little buffalo" to the Rosebud Reservation. You can read the details in my story in Dezert Magazine, which is available both online and in print. Dezert Magazine also has a Facebook page. 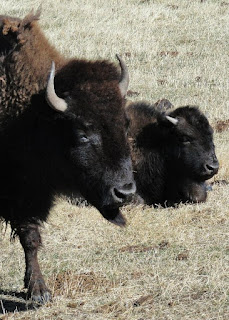