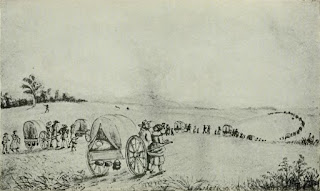 Mormon Handcart Train, from "The History of Iowa
from the Earliest Times to the Beginning of the Twentieth Century."

Between 1856 and 1860, nearly 3000 pioneers from England, Wales, Scotland and Scandinavia traveled to the end of the west-bound railroad lines in Iowa City, to Salt Lake City, Utah, with their belongings piled into handcarts specifically designed by the LDS Church President Brigham Young. These determined families were on their way to join thousands of other pioneers in establishing an independent Mormon community.

The Death of the Founder of the LDS Church

In 1830, Joseph Smith formed the Church of Christ, later renamed the Church of Jesus Christ of Latter-day Saints, based on teachings collected in their sacred text, the Book of Mormon. According to The Church of Jesus Christ of Latter-Day Saints website, these teachings include discussions on family life, the nature of God, and the purpose of life. The popularity of the Church of Christ was immediate, wide-spread, and provoked suspicion and hostility in some communities, often resulting in extreme acts of violence. In Ohio, their founder, Joseph Smith, was beaten, tarred and feathered. The members of the Church moved from their original locations in New York and Ohio to Missouri and Illinois, to no avail as local government officials continued to encourage violence against LDS Church members. In 1844, Missouri Governor Lilburn Boggs issued an “extermination order” against all LDS Church members. In response to this order, an armed mob attacked the prison where Joseph Smith was held on charges of treason and he was brutally murdered.

Brigham Young took over leadership of the Church in 1847 and led the members of the Church across the American desert into Utah territory in an effort to provide safety for the members of their community. Young’s intention was to establish an isolated, and therefore completely independent community. As they traveled to Utah, the pioneers established what would be known as the Mormon Trail. The Perpetual Emigrating Fund Company was established to assist traveling Mormons, who are also called Saints, with the financial burdens of the move. As each family settled on their land they made payments back into the fund, which enabled more families to cover travel expenses.

European Saints traveled to Utah by ship, then train, and the traditional ox-drawn wagons, but a poor harvest in 1855 depleted the fund and Brigham Young was faced with tough decisions regarding assistance to families already preparing to leave their homes. He decided that the use of less expensive handcarts was the best option. Young’s handcart design resembled a square wheelbarrow with two five-foot wheels and a four foot axle. It weighed sixty pounds. Each side had a seven foot pull bar and there was a three foot crossbar at the front which could be used to either push or pull the cart. The interior was three feet by four feet with 8 inch walls and carried a maximum load of 500 pounds. There were five people assigned to each handcart and each was allowed 17 pounds of clothing and bedroll. They were also supplied with tents large enough for 20 people and a tent captain. A small number of cattle was assigned to each group and ox wagons were available to carry supplies.

On September 26, 1856, the first two handcart companies arrived in Salt Lake City. The third arrived a week later. The journey along the 1030 mile Mormon Trail from Nebraska to Utah was difficult and family members died along the way, but the majority made it through. The Martin and Willie Companies, the fourth and fifth groups to depart from Europe, did not fare as well. Church members did not expect, or prepare for, the large number of families who responded to the handcart plan. Handcarts for the last groups were hastily constructed from green wood without iron supports on the wheels or axles. These last two companies also lost precious travel time gathering supplies. A returning Church missionary surveyed the situation and argued that the companies should winter in Nebraska. Over 100 emigrants followed his advice, but 400 chose to continue.

The Tragedy of the Willie and Martin Handcart Companies

As they crossed Nebraska, a buffalo herd caused the Willie Company’s cattle to stampede. The handcarts were forced to take on heavier loads of supplies in order to compensate for this loss. A passing church official took note of their demise and returned to Utah to fetch a rescue party, but the situation continued to worsen. When the two companies reached Wyoming they learned that badly needed supplies had not yet arrived. They were forced to cut back on rations and the Martin Company discarded blankets and extra clothing, a decision that would later cost them dearly. Meanwhile, back in Utah, a rescue party of 16 wagons of food and supplies and 27 men led by George D. Grant left for Wyoming, but the handcart companies were already trapped by a sudden blizzard. The rescuers found the Willie Company first and dispersed flour rations to the families. The Martin Company was trapped near Caspar Wyoming and waited nine days before they were rescued. When the two companies finally arrived in Utah, 213 Saints from both companies had died on the Mormon Trail.

The Legacy of the Handcart Pioneers
Less than 10 percent of the Mormon pioneers traveled with handcarts, but their sacrifice was great and their accomplishments are celebrated to this day through reenactments. In 2006, the LDS Church held large celebrations on the 150th anniversary of the handcart company travels. The Wyoming campsite where the Martin Company huddled in the snow awaiting rescue is now known as Martin’s Cove and is visited by thousands of tourists each year.

Sorry to hear about your injury. I wish you a quick recovery! :)

Thank you! I'm just eager to get back to my normal writing routine! Thanks for reading!

Interesting article, as usual, and so sorry to hear about your fall. Get well soon. Strangely enough, I just read an article about the satire play, 'The book of Mormon'. I didn't really know anything about the Mormons (I discount slurs and rumours) and am pleased to find such an informative article on them. Didn't realise they were so persecuted in their early days.

It's an interesting story. I suspect that much of the violence that happened after they reached Utah was the result of fearful reactions based on experiences when they first organized, if that makes sense. In other words, they were so persecuted in the early days that they spent many years living in fear and reacting to the presence of strangers in a defensive manner. This fear may have led to the Mountain Meadows Massacre (which I'll write about when I get caught up, but it's a very sad story.)