Nicodemus, Kansas: One of the First Black Western Communities 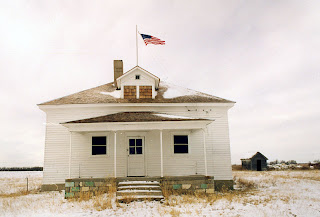 Nicodemus, Kansas, one of the first black communities in the West. At the end of the American Civil War, the freed slaves continued to face harassment and worse in the Southern states, so families started moving West with the hope of finding a better life. What they found was that they fared better if they established their own communities, and Nicodemus, Kansas was one of the first.  Although technically, Kansas is now considered a Central state, because the black settlers were moving into the Western United States, they considered Nicodemus a Western town.

Nicodemus is located in Northwest Kansas and is referred to as a "living community," the oldest and only remaining all Black Town west of the Mississippi River, settled on the western plains in the 1800s by former slaves during a period also known as "The Black Exodus." 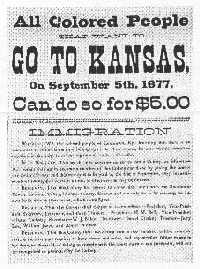 Flyers were distributed to attract black families to Kansas.

The Black Exodus was so great that by 1880, an estimated 25,000 blacks had migrated into Kansas. They camped in churches, or on the Topeka, Kansas fairgrounds. Most of these new Kansas residents traveled to the state by foot and didn't have a penny to their name, but they were determined to survive, and to live in freedom. Some arrived by boat, their fare paid by black charities and societies.

Henry Adams and the Black Moses

After Reconstruction, blacks were still treated cruelly, segregated, and forbidden from living within the city limits of southern states. The hostility was overwhelming, and the men and women who survived the American Civil War realized that the only way they would be able to survive its aftermath would be to move out of the South. During this time period hundreds of small agricultural communities sprouted in the American West and just as quickly withered and died. Nicodemus somehow survived. 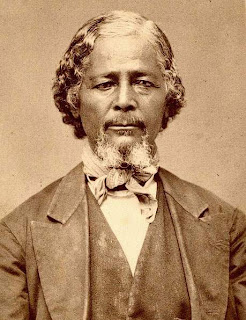 Benjamin "Pap" Singleton, a carpenter who became known as the Black Moses.

Benjamin "Pap" Singleton, a Tennessee carpenter, and Henry Adams, who was from Louisiana, realized early on that the only option available for blacks was to not only move further west, but to start communities where only black families lived and could support each other without enduring prejudice while they recovered from the war. A place where they could thrive in a community environment. They considered Kansas to be a good place to start black settlements because the memory of the work of John Brown and other Abolitionists still remained in black communities providing them with a source of encouragement. Singleton and Adams convinced thousands of black families to head for Kansas. In fact, Pap Singleton was so "convincing" he became known as the Black Moses. These two men seemed to lead the cause, and a few historians have attributed the settlement of Nicodemus to Singleton and Adams, but according to historian Kenneth Hamilton, who traced the early origins of the settlement, the person responsible for convincing families to move to Nicodemus was white promoter W.R. Hill. Nevertheless, it appears that Singleton and Adams started the movement West.

It is believed that the town of Nicodemus is named after a man mentioned in the Gospel of John in the Bible. He was a Pharisee who showed favor to Jesus. The town started with 350 people. One white and six black Kansas residents formed the Nicodemus Town Council on April 18, 1877. W.R. Hill recruited the 350 people and the Nicodemus Town Council helped assist with transporting the group to Kansas. They also helped the families select and purchase their homesteads. 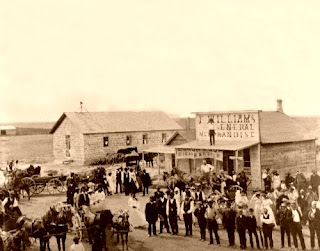 The early settlers didn't have trees available for houses, or money to purchase lumber, so they built their first homes as dugouts in the earth or hillsides. It was not an easy living. They had to cope with poor insulation--hot in summer, cold in winter--insect infestations, rodents, snakes, just about anything that walks or crawls on the ground would of course be attracted to their homes because of the smell of food. I imagine it was similar to living in a cave or a dugout, such as those used by the Navajo at the Bosque Redondo. 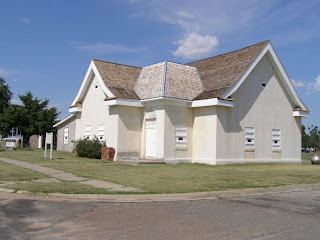 Eventually, the residents were able to build sod houses, which are made from rectangular layers of sod or adobe. Finally, they built their family homes out of stone. This was an exciting time in the progression of the town. The townspeople began to feel as if they were succeeding, as if the town was going to make it. The stone buildings appeared more permanent to business owners who came to Nicodemus and what once was a collection of caves became a town.

The Railroad Passes by

The ultimate goal of all this work, and most small towns that were started at the end of Reconstruction, was to attract the railroads. If the trains came through your town this attracted businesses and tourists. Although it was originally believed that the railroads would come to Nicodemus, the town was bypassed, and the population of Nicodemus dwindled. The business owners moved to nearby towns that had railroad stations. Some residents chose to stay, and their personal histories are now being collected so they will hopefully, eventually be included in the town's history displays. 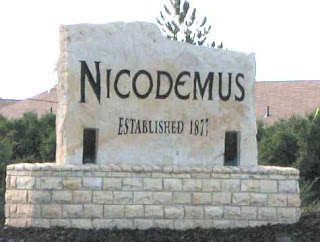 Nicodemus is located along Highway 24 in Graham County, North Central Kansas. According to the 2010 United States Census Bureau, Nicodemus had a 2010 population of 59. In 1976, Nicodemus, Kansas was designated a National Historic Landmark. Nicodemus has a Visitor's Center with a bookstore and exhibits of the town history. There are walking and guided tours of the historic buildings and other features of the town. There is also a par, playground and picnic area for tourists.

Cool article! I used to live in Missouri and many of the black towns and neighborhoods have disappeared. Some died because of integration, while others were bulldozed to be used as something more beneficial for the white community.
I blog about the West too, so you just got a new follower!

Sean, please post your blog address so you can share it with my readers! I have discovered that people who read about the West can never get enough! Lol!

I recently moved from Texas and there was a town I drove through often in the Hill Country on my way to visit my grandchildren in Colorado. It was called Coleman, I believe, and I remember one of my neighbors mentioned to me that it was an all-black community that grew into a rather large city. Now that I've studied the history of Nicodemus I'm intrigued about the history of Coleman and want to know more. Funny how that works with history--the more you learn, the more you want to know!

Anyway, you mentioned Missouri. I clearly recall seeing a sign in Coleman about how it was started as a black community and I thought it mentioned that it was started after the end of the Civil War. So, if Nicodemus is the last of the black communities in the West, perhaps Coleman isn't considered in that statement because it is in Texas, which was considered part of the South in the 1800s. Now my mind is already working on the next step in research I must do to answer the questions that came to me while writing this post. See what I mean? It's addicting!