When my family first moved to Colorado we were fascinated with its history, and we still are! One of the more exciting aspects of Colorado is its extensive mining history and when I was a child we spent many weekends and holidays driving through the Rocky Mountains visiting former mining towns turned ghost towns. 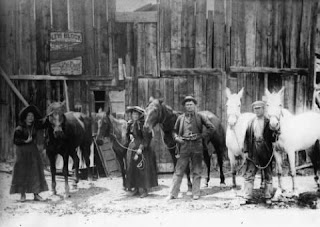 One ghost town well worth the drive is St. Elmo located west of Buena Vista off Hwy 24. St. Elmo is a remarkably well-preserved ghost town with 24 of its original buildings still intact, including the church, general store, saloon, and jailhouse, and most of these buildings still have their original outhouses! At one point, St. Elmo had over 150 mine claims and was on its way to becoming a bustling city. Of course, Cripple Creek, also located in the southern part of the state, once had over 4500 acres of mining claims. Nevertheless, by all accounts, St. Elmo was a happy, busy place, even if it was smaller than other nearby towns.

St. Elmo was started in the late 1870s at the height of the gold rush. It was first called Forrest City and was later renamed, possibly after a popular fictional character from the 1859 book St. Elmo by August Jane Evans. In this book the main character, St. Elmo Murray, experiences a spiritual awakening through the influences of a woman named Edna Earl, which is rather romantic, and as you drive through the area with its breathtaking scenic views and sunsets that explode with color, the thought of a romantic title for this town seems perfectly logical.

Annabelle Stark and her brother, Tony, were the last residents of St. Elmo. Annabelle’s personal history fits well with a romantic ghost town. By all accounts, Annabelle was an attractive and charming young woman who certainly had a bounty of handsome suitors available, but some sources claim she remained single and attended few social functions. Annabelle had two older brothers and this could explain why she rarely attended social functions if they were over-protective of their lovely sister! It was rumored that Annabelle was engaged to a man in Salida, but the engagement was broken with no explanation. However, at least one Colorado magazine lists Annabelle’s name as Annabelle Stark Ward, which may indicate that she once married and perhaps divorced, or was widowed at a young age.

The Starks owned and operated the Home Comfort Hotel and a retail store that once supplied the miners, as well as the telegraph and post office. As often happens in mining towns, the more than 2000 residents moved on in the early 1920s when the mines stopped producing, but the Starks decided to stay. They purchased homes and properties as the rest of the miners and their families left, but without a town, the properties lost their value. In 1922, the Denver, South Park & Pacific Railroad (DSP&P), which brought many of the miners and families to the area in the first place, changed its route and no longer traveled to St. Elmo. After their brother, Joe, and their mother passed away, Annabelle and Tony, who was once a telegraph operator for the DSP&P, remained. In later years, Annabelle was often seen patrolling her properties with a shotgun, and considering the remoteness of the location, I can’t say I blame her!

The drive to St. Elmo is worth the time, especially in the fall when the trees change their colors. St. Elmo now has eight full-time residents and all buildings are privately owned, so please be respectful when you visit. The general store is open from May to October. There are numerous websites that discuss St. Elmo, and I would recommend checking them out and taking notes before visiting this lovely, little town. I have a feeling Annabelle Stark would be more than happy to know her town still attracts visitors!
at February 09, 2009

i was in St, Elmo in july of 1998 and really enjoyed it I saw one of the oldest washing machines that I had ever seen. I do not when it was made. i hope to travel to that area again before I die.

I have ( I believe) an original photo of a cattle drive in St Elmo. It is signed in silver ink by Ron Lamb. There is a brief story about St Elmo attached to the back. It is a black and white ( sepia ) and I believe it is very old because of the crack lines...otherwise this is well perserved. The typed information on the back has a lot of discoloration and is soiled. I was wondering if you could help me with some more information on this.
The building most identifiable is the post office ( painted sign above the door) which also has some store name on the other side of the door)..I couldn't make out anything on it except the word " store" ..The photo is matted and the size is about 7 1/4" x 4 3/4". Matted it is 8" X10". Written in pencil on the inside of the mat is " cattle drive".
Would you have any idea what this might be worth or who would know? Thank you for your time. Liz Holshouser

Ms. Holshouser, I'm not a collector, but I wish I was at this point. I find the photograph tempting for two reasons--St.Elmo and the depiction of a cattle drive! Although I'm certain any museum would love to have this piece, you are clearly looking to sell. I would not be able to give you a value estimate. This involves a type of expertise I do not have. I can imagine there would be an interested buyer somewhere, though. There is an auctioneer who specializes in Old West memorabilia. Brian Lebel's Old West Show and Auction was in charge of the recent sale of the only surviving tintype image of Billy the Kid, which had an estimated value of $400,000, but sold for $2.3 million. I am not in any way suggesting your photo has a similar value, but I am suggesting that this is the website where you should start your research in locating someone to help determine the value and help you sell this piece. Good luck to you--and congratulations! That's quite a find! http://codyoldwest.com/owaboutus.html

I have been reading a book called memories of st.elmo that might help you with more information on this little ghost town. One thing I read that you mentioned is that you were not sure if Annabelle ever married or if she had been widowed. in this book it says she was widowed. It is written by charlotte Vickerson Merrifield with Suzy Kelly.

Thank you so much! That question has bothered me. I'll try to find the book. I love books on ghost towns!

Thank you for reading my blog! As you can see, there were a number of comments removed by me. I will not tolerate cyberbullying from anyone on this blog or any other writing that I post online. In the future, I will only post comments from readers who use their real name--the fact that you opened an account, posted, then closed the account is a very clear sign that you are not who you claim to be.

This is a family blog. The intention of this blog is to educate, inform, and share experiences and thoughts about the American Old West. I appreciate and respect all of my readers and for this reason, I moderate all comments and only post comments that show respect to me and the other readers of the blog. I have posted this policy in the sidebar and stand behind it--no more anonymous comments, all comments are moderated, and no rude comments, obscenities, or cyberbullying will be posted on this blog, ever.

Thank you so much for reading my blog and sharing your experiences with me! I appreciate your loyalty!
Darla Sue

She never married but lived with a companion.

She never married but lived with a companion for a short time.