The American Southwest just would not look the same without the prickly pear cactus. These amazing plants have not only represented the State of Texas since 1995, they have always represented, in the minds of many, the life of the cowboy in the Old West. It may come as a surprise to learn that the word "cactus" is derived from a Greek word, "kaktos," but what is not surprising is the meaning of kaktos: prickly plant. Thus, the "Prickly Pear Cactus" is a bit of a tongue twister. Prickly Pear prickly plant. In Texas, though, they are generally referred to simply as "pear."

Prickly Pear plants can grow quite large. They have oval-shaped patties that grow on top of each other in clumps that can be as high as eight feet--not something you want close by when you're struggling with a bucking horse. Sometimes the deer knock off the pads. Let the end dry a bit, then stick it in soil and it will root. 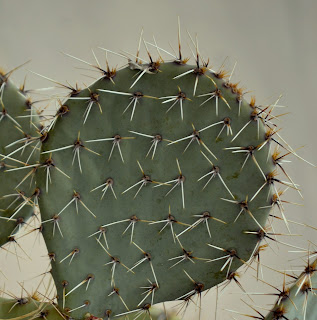 Prickly Pear Cactus is more than landscaping for the people of the American Southwest and Mexico, it is also a source of food, and can save one's life when lost in the desert by providing a small amount of fluids and a large amount of nutrients. The plant contains both a fruit and a vegetable. In times of drought, cowboys often burn the needles off so the cattle can use the pads and fruit for food. This is called "burning pear." Aoudad, or Barbary Sheep, wild sheep in the Southwest, also enjoy nibbling around the edges. During times of severe drought in the days of the Old West, the Texas Longhorns would use the Prickly Pear Cactus for survival, munching down the entire plant, spines and all.

The fruit of the Prickly Pear grows on top of the patties resembling stubby fingers on a hand. The fruit starts as a flower, then grows into a pink to purple stub called a "Tuna." To eat the tuna, it is best to remove it from the plant with a pair of tongs, then hold a match or lighter to the needles and burn them off. The tuna is then sliced in half and the seeds are removed. This leaves a small amount of sweet, juicy, goo that is very tasty and packed with Vitamin C. It tastes best when chilled, and in some places, is considered a delicacy.

The pads of the Prickly Pear are also edible. They are called "nopales" or "nopalito" and sold as a vegetable in the produce section in the Southwest and Mexico. The needles are removed and they are sold in packages, but in the field, one would burn the needles off before trying to remove the nopalito from the plant. They are generally sold in small and medium sizes. They are harvested between spring and summer. 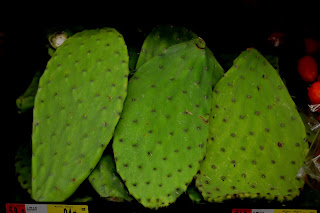 To eat the nopalito, first make sure even the fine needles are removed. It might be best to wear thick gloves, or run a flame around them one more time. Any remaining spines will burn off in cooking. Wash the pad with cold water and remove and dried patches or scarred areas. They are then fried or boiled and added to eggs, soups, and chili.

Of course, there is another use of the multi-purpose Prickly Pear cactus. There is a type of bug that loves the Prickly Pear. It resembles mealy bugs, but it's called Cochineal. They grow on the pads and sometimes the fruit. They are considered an infestation and can destroy a large grouping of Prickly Pear, knocking it to the ground, if not removed with soap and water. It is easily recognized if you rub the white with your finger. It leaves an indigo smear on the plant.

The bugs can be removed with a knife and placed in a plastic bag. Take them into the house, spread them on a cookie sheet--I would obviously cover the pan with foil--then cook them in the oven on a light setting for 10 minutes until dry. They can be stored or used immediately.

The Cochineal is then used in a dye bath with alum as a mordant. If the dye is used on wool fabric, it produces a bright red color. This dye was used by Native American Indians in California mission to make blankets.

And this is one of my favorite little Prickly Pear bits of trivia. According to Factropolis, the Prickly Pear Cactus secretes an oily substance during full moons!

So remember, next time you see a Prickly Pear as you walk through the desert, show the plant the respect that it deserves. It will serve you well.
at May 26, 2011

I love cacti and have always had a collection of these "dear friends."

I do, too. I was surprised to learn that they do not transplant well from state to state. A prickly pear from Texas will not necessarily tolerate the higher altitude and colder climate of the high desert of New Mexico! I have many cacti in pots, though. Quite a variety. When my grandchildren grow older I will give some to my daughter. She wants house plants, but she is a house plant serial killer, so she needs a cactus.