Tornadoes in the Old West and Tornadoes Today

Sometimes, as I gaze across the Texas fields listening to the birds and the wind moving through the trees, I like to imagine that I am a pioneer, walking beside our covered wagon. I am trying to keep the children from walking too close to the heavy wooden wheels, watching as my husband, in front of me, guides the horses, or oxen, along the ruts in the trail. 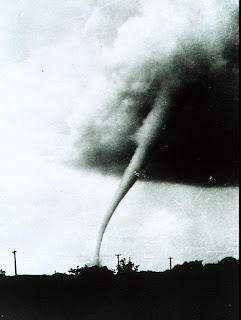 We stop for the afternoon so the animals can rest and prepare lunch for the children. Suddenly, as we are eating, fast-moving clouds cover the sky like a black blanket. My husband looks nervous. He unhitches the horses.

It starts to rain and we move beneath a tree because no one has told us that trees attract lightning. The children are starting to cry. Suddenly, we hear what sounds like a giant beast, and off in the distance a black cloud begins to form, not in the sky, but on the ground, like a funnel, a funnel that grows in width as it moves upward toward the heavens, and we can see that inside of this funnel trees and grass are whipping around, tossed about like a child's toys in the dust.

Early pioneers knew very little about tornadoes. Most of the early pioneers came from Europe and there is no place in the world that has tornadoes like the United States.

It was 1882 when the first tornado researcher started gathering information on weather patterns and damages in the hopes of saving lives in the future. According to the NOAA website, U.S. Army Signal Corps Sergeant John P. Finley was assigned tornado duty and he was the first person to establish forecasting methods, which he published in 1888. 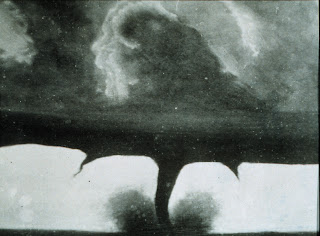 This is believed to be the oldest known photograph of a tornado taken outside Howard, South Dakota in 1884. It is difficult to say if tornadoes have increased in frequency or strength because the study of tornadoes is still relatively young.

Unfortunately, the U.S. Government banned the use of the word "tornado" from forecasts by the U.S. Army because they were afraid that the use of the word might cause people to panic. This rule was in place for the next forty years. This did not, however, prevent tornadoes from destroying homes and lives. On April 11, 1896, two tornadoes hit Colorado City in Mitchell County, Texas, killing a twelve year old boy and destroying five homes. On April 15, 1896, an F3 tornado destroyed numerous farms and killed two children near Faulkton, South Dakota. Imagine how different the results might have been if these families were issued a pamphlet from the U.S. Army warning them how to take shelter in a tornado?

On April 27, 2011, the deadliest outbreak of tornadoes since 1932 struck Dixie Alley in the American South. The NOAA's National Weather Service Storm Prediction Center Meteorologists issued the first warning eight days in advance. Local meteorologists started warning residents three days in advance. Most residents received a 24 minute warning that a series of tornadoes were on the ground. In spite of these advance warnings, a horrific number of lives were lost.

When I think about these warnings and the days of the pioneers when no warnings existed, and I think about what would have happened when the pioneers encountered these deadly tornadoes, I feel grateful that times have changed, that warnings do come, and although far too many lives were lost, the situation could have been much worse.

I was born and raised in Iowa. I think Iowa is #6 on the all-time total tornadoes list. I supposed Iowa would be on the northern edge of Tornado Alley. Anyway, all those years of living in Iowa and I saw only one tornado and it didn't even touch the ground.

I imagine those early European settlers were fascinated and horrified by the great destruction those tornadoes made in the Midwest and Great Plains States.

Tornadoes fascinate me with their power and unpredictability. In 2008 I spent three hours in a basement closet with my two year old granddaughter as tornadoes whipped through northern Colorado. I would open the closet and look outside to blue skies, then five minutes later another warning came across the television. A mile wide tornado hit the town of Windsor on the other side of the highway. I've seen quite a few tornadoes and gustnadoes in New Mexico and Colorado. Oddly, though, in all the time we lived in Texas, I didn't see one tornado. We had plenty of warnings!

I need to write more on tornadoes and the Old West. I read a story about two young girls who hid in the potato cellar when they saw a tornado coming. It wiped out the entire town, but they were among the few survivors and many believe this was the start of tornado shelters, when settlers first realized they needed to hide underground to survive.