"Bury my Heart at Wounded Knee" and Stephen Vincent Benet 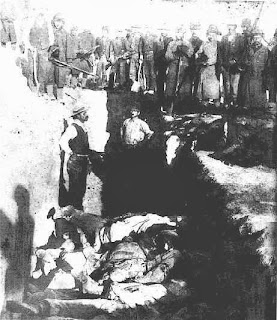 '
Most of the victims of the Wounded Knee Massacre were buried in a mass grave.

The Wounded Knee Massacre is a painful subject that I first studied in my early teens when my mother brought the book Bury my Heart at Wounded Knee home from college and I was introduced to the horrible atrocities committed against the Native American Indians.

Big Foot, leader of the Sioux Nation, lies frozen in the snow where he died on December 29, 1980, in the Wounded Knee Massacre. Oddly, the original photo caption reads that he was "captured" on this date, but he was clearly murdered along with the women and children in his camp.

Bury My Heart at Wounded Knee by Dee Brown

Brown's other books sold, but not well, and his publisher originally ordered a small run of 10,000 copies. Benet's publisher obviously had no way of knowing that this book would touch the heart and soul of all Americans who picked it up--for once they picked it up and started to read, they could not, as the phrase goes, put it down.

The story, which I will expand on in another post, began long before December 29, 1890, but that is the day when 500 U.S. Seventh Cavalry troopers--the same regiment that served General Custer--gunned down more than 200 Lakota, mostly elderly men, women and children, at Wounded Knee Creek on the Pine Ridge Reservation in South Dakota. It was originally referred to by the army as a "battle," but as you will read in a few days, there was no battle. There was no war. When the news slowly trickled out to Americans and they learned of what happened, the event became more appropriately known as a massacre. 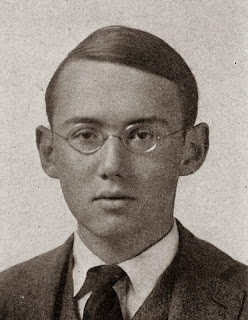 Photo of Stephen Vincent Benet taken while he was attending Yale College in 1919.

A Line in a Poem Becomes More Than the Poem Itself

However, Bury my Heart at Wounded Knee is more than the title of a book, it is also a quote from the poem "American Names" by Stephen Vincent Benet. The poem was first published in the Yale Review in October of 1927. The meaning of the poem does fit well with the intention of the book. The poem is an expression of Benet's love for certain places in America and their place names.

“I have fallen in love with American names,
The sharp names that never get fat,
The snakeskin-titles of mining-claims,
The plumed war-bonnet of Medicine Hat,
Tucson and Deadwood and Lost Mule Flat.”

I have a bit of an obsession with quotes, and I often see this poem on quotation pages on the internet, but the quote from the poem is generally the final verse, which mentions Wounded Knee. The phrase includes one line that has taken on a different meaning than the poem, and now overshadows the poem, becoming far more powerful than the poem itself:
“I shall not rest quiet in Montparnasse. I shall not lie easy at Winchelsea.
You may bury my body in Sussex grass,
You may bury my tongue at Champmedy.
I shall not be there. I shall rise and pass.
Bury my heart at Wounded Knee.”

These words captured the emotions that Americans felt when they gradually, through the years, began to realize the full horror of the event, the tremendous, painful loss, a wound that for some, will never heal.

Hi there. Nice post about a tragic event (and a fine poem).

One small comment: I believe that Benèt wasn't directly referencing the "battle" of Wounded Knee so much as the spot where the Lakota chief Crazy Horse was buried. From Bury My Heart at Wounded Knee (page 296):

"Through the crisp, dry autumn of 1877, long lines of exiled Indians driven by soldiers marched northeastward toward the barren land [a reservation on the Missouri River]. Along the way, several bands slipped away from the column and turned northwestward, determined to escape to Canada and join Sitting Bull. With them went the father and mother of Crazy Horse, carrying the heart and bones of their son. At a place known only to them they buried Crazy Horse somewhere near Chankpe Opi Wakpala, the creek called Wounded Knee."

Of course, it's possible that Benèt was referencing the massacre, too.

Yes, that is precisely correct, Darla Sue. It is a literal burial by his parents of their son's literal heart, that of Crazy Horse. This fact makes the poetic significance of the phrase ever so much more powerful. I do not know what was in Benet's mind, but this post from Anonymous reverberates with verity. There is a monument to Crazy Horse currently under construction in South Dakota, just a few short miles from Mount Rushmore. To gaze upon it is a poignant experience. Make the trek at your soonest convenience. Have a happy day!

Thank you. I agree, and will remove the comments about identifying yourself in comments (though it is an important step in preventing hackers, spammers, and trolls!) I have been to Mount Rushmore, years ago, and believe the monument to Crazy Horse is long overdue.