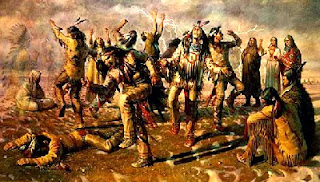 The importance of The Ghost Dance in the history of the Native American Indians cannot be over-stated. The Ghost Dance was more than a dance, it was a spiritual movement that brought hope to the Native American Indians at the most desperate moment in the history of their existence--the late 1800s. It began with a dream of the return to a beloved way of life and the disappearance of the invaders that had destroyed that way of life. It ended on December 29, 1890 with the deaths of more than 200 Sioux men women and children, as well as the death of any hope that remained. 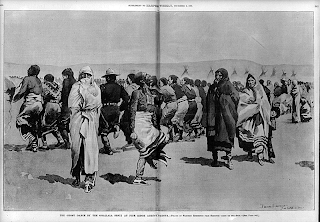 The Ghost Dance performed by the Ogallala Sioux at Pine Ridge Agency. This painting was made by Frederick Remington based on sketches he made while witnessing the Ghost Dance.


There were many signs that this moment was coming, many dreams and movements leading up to Wounded Knee, but it was The Ghost Dance that brought the crisis to its peak. An odd name, when you think about it, words that could have various meanings--a dance to bring the ghosts of ancestors back to their people, or a dance that transformed great warriors and skilled caretakers of their mother, Earth, into mere memories.

Prophetic Visions and Movements Prior to The Ghost Dance

These visions generally had a similar theme. For instance, one 18th century Seneca medicine man had a prophetic vision that warned of the complete eradication of the Native American Indian if they followed the ways of the white man. The Medicine Man was named Handsome Lake and he suffered from the disease of alcoholism. When he was in his trance he would have experienced withdrawal, and alcohol withdrawal is deadly. He had a near-death experience and his vision during this time attracted thousands of followers who continue to believe in his prophesies to this day, according to The Spirit World.

Another Wanapum shaman led a group called "Dreamers" who had a belief that I personally relate to as it is similar to my own. The shamen, Smohalla, who lived in the mid 19th century, taught his followers to resist anything they considered harmful to nature.

However, Smohalla also considered farming harmful to nature, and it's possible that they type of farming the white men practiced was harmful--many farming practices used today are still harmful to the land. When confronted by government agents about the logic behind his teachings Smohalla replied, "You ask me to plow the ground. Shall I take a knife and tear my mother's bosom? Then when I die, she will not take me to her bosom to rest." To the Wanapum, the earth was their mother, just as the Canyon de Chelly was mother to the Navajo.

According to The Spirit World, in 1869 a Paiute medicine man named Wodziwob, or Grey Hair, had a vision that started one of the largest movements among the Native American Indians. In Wodziwob's vision the recently-completed transcontinental railroad brought back the deceased ancestors in a miracle that would mark the revival of the Native American people. 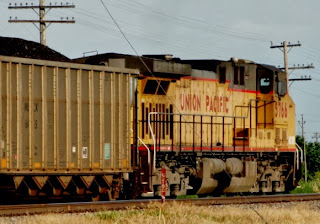 Union Pacific steam engine. Photo taken near Eaton, Colorado by Darla Sue Dollman.
Wodziwob told the Paiute should prepare for this miracle by reviving a traditional Round Dance symbolizing the sun's journey through the sky. The Round Dance was referred to by many observers as a "religious frenzy," Wodziwob's movement lost its great popularity when the train filled with deceased ancestors failed to arrive and instead, the Paiute reservation was struck with severe drought, which destroyed the Paiute's hopes and Wodziwob's credibility.

For the next two decades the lives of most tribal Native American Indians living on reservations rapidly declined. To make matters worse, the success of the railroads attracted the same wave of white settlers, gamblers, prostitutes, and business owners that the discovery of gold would bring to small towns. As they traveled through the West on trains, the white men slaughtered what few buffalo were left. Some trains would make short stops so travelers could randomly shoot buffalo from the train windows, watching the majestic animals slowly fall to the ground and die.

The United States Government continued to provoke the situation by breaking treaties and promises, reducing land holdings--not a few hundred acres, but millions of acres previously approved by Congress--food allotments, promised clothing and supplies. According to the Story of the Great American West, the years 1889 and 1890 were the most painful yet for all of the various tribes now living on small reservations that were stricken with drought. The lack of food supplements from the government led to starvation and disease, particularly among the children. It was a time of great despair among people desperate for hope.

In 1889, the Paiute Shaman Wovoka also had a vision, a dream that his people would regain their former strength and power, but his dream would prove to be apocalyptic. As discussed before, Wovoka assured his followers that if they followed his instructions, wore the protective clothing and danced The Ghost Dance the buffalo would fill the plains, dead tribal members would return to their families, and the Native American Indians would live a blissful life free of the white men.

Wovoka's timing was impeccable, and his revival of The Ghost Dance became a cult that moved across the West like a rogue wave. By 1890 it had reached the Sioux in South Dakota. They were desperate with drought and starvation and embraced the symbolism of The Ghost Dance, dancing to the point of exhaustion. They wore their shirts with magical symbols painted on them with the belief that the shirts were blessed and would repel any bullets shot at them, which naturally intimidated outside observers.


Ghost Dance of the Sioux, illustrated in the London News, 1900.

The adults left their chores, the children left the schools, and they all danced with a frenzy that caused great panic among many of the white people, including Indian Agent James McLaughlin who sent a desperate message to the military, stating: "Indians are dancing in the snow and are wild and crazy...We need protection and we need it now." The government responded, sending troops.

According to Lakota Birgell Kills Straight on The Real West, "Dancing was a way of life. Even the wind in the trees--everything seemed to dance. There's songs all over. Everything begins with a song and a dance. It's a ritual."

"This is why The Ghost Dance was readily acceptable," he continues. "It wasn't an elaborate ceremony. People linked hands and danced a very simple step to the left. And that's basically all it was."

According to author Joseph Marshall, III: "They tried to dance themselves into a trance so they could communicate with their ancestors." Day and night, round and round they danced until they collapsed from exhaustion, then they would rest, rise, and dance again.

The Ghost Dance: Harmful or Harmless?

There were some who viewed The Ghost Dance as harmless, as a dance of hope among a people filled with despair, seeking hope. Indian Agent Valentine McGillycuddy (love that name) sent his own dispatch to the U.S. Government recommending that the government refrain from interfering. "I should let the dance continue," he said.

"The coming of the troops has frightened the Indians," he continued. "If the Seventh Day Adventists prepare their ascension roves for the second coming of the Savior the United States Army is not put in motion to prevent them. Why should not the Indians have the same privilege?"

Why indeed? The West was flooding with people of every religion you could possibly imagine, so why stop the Native American Indians from worshiping as they pleased? Because they were Indians.

What a confusing time for Native Americans. First, their own beliefs, second, the broken treatises with the U.S. government, and third, the missionaries coming to tell them of one born in the middle east who has come to save them. With the quick diminish of their lands and watching the technology of the day advance so quickly (like trains), the sport of "hunting" buffalo,and the whole farming idea.. being moved to lands that had poor agricultural value, nothing in life must have made any sense...kind of like today's world we live in. Joe

I agree--it was confusing for everyone. I think that's why people around the world are fascinated by the American Old West--it changed so quickly, so much.

I am extremely grateful to you for this great content on blog. Thanks a lot for useful , information and blog . That's very nice. I will recommend all my friends on twitter and facebook.

I think you do a great work here to post a nice blog . Really i like your blog . I will follow your blog.
Thank you for everything . indeed I found a lot of things to read on this blog . Thank you .