Wovoka, (1856-1932), who was also known as Jack Wilson. Wovoka was the Northern Paiute religious leader who founded the Ghost Dance movement that is believed to have added to the fear and mistrust that led to the Wounded Knee massacre.

Leading up to the discussion on the Wounded Knee Massacre it seems there is so much preliminary information that should be discussed in order to fully understand what occurred on that day, so many seemingly minor incidents, major issues, people, places, all mixed together to create a situation that led to the horrific events of December 29, 1890.

Of the many people involved in the incidents leading up to that fateful day, Wovoka, or Jack Wilson, plays one of the most intriguing roles, for it was Wovoka who introduced the people to the Ghost Dance in the spirit of reviving their hope for a better future, and yet, it was Wovoka's belief that anything that brought a better future to his people should come about through non-violent acts. Depiction of the Sioux Ghost Dance by the Philadelphia Publishers Union, 1891.

Wovoka was born in Nevada, possibly in or near Carson City, around 1856. It is believed that his father was the famous religious leader Tavibo, also known as Numu-Taibo. Wovoka's religious teachings were similar to, or based on, the same teachings of his father. Wovoka also had training as a medicine man, a Native American Indian spiritual healer.

Wovoka's father died when Wovoka was a young teen, around 14 years old. It was then that David Wilson, a nearby rancher, took Wovoka into his home and continued his religious instruction, this time teaching Wovoka the beliefs of the European American Christians. Wovoka worked on Wilson's ranch during the day, and at night, Wilson and his wife, Abigail, taught Wovoka Christian theology and read to him from the Bible. Wovoka was given the name of Jack Wilson.

Wovoka Gains a Reputation as a Healer and Magician

As he grew older, Wovoka became a popular and respected medicine man. It is also believed, however, that he knew many magic tricks, but it is difficult to say whether or not this would have affected his reputation in any way, or how it would affect his reputation. It depends on how "magic" was perceived by his followers.

Wovoka was known to have performed a popular Old West trick known as the bullet catch, which made it appear as if he survived being shot with a shotgun. This may have influenced the Lakota in believing their "ghost shirts," worn during the Ghost Dance, were capable of stopping bullets. He was known for many "tricks" though, including levitation, and influencing the weather, which was another common trick used in the Old West as pioneers and Native American Indians both depended on the weather for survival of their crops and livestock.

On January 1, 1989, during a solar eclipse, Wovoka claimed he saw a vision that the Paiute dead were resurrected and the white men disappeared from the land. According to the book Great American West, Wovoka told visiting tribal representatives that he had this vision during a seizure, and he believed he visited the Great Spirit in Heaven during this seizure, which would make sense to Wovoka who was raised to believe in a mixture of both Native American and Christian spirituality.

During this vision, he said, he was told that the buffalo would once again fill the plains (if only this were true!) and their dead tribesmen would return to their families to live a peaceful life. Wovoka claimed he was told this would only come to pass if his followers performed the proper ritual dance, which became known as the Ghost Dance due to its association with the resurrection of the dead.

The Cult of the Ghost Dance

The Native American Indians at this point were desperate, and Wovoka's vision offered them hope. Word of his vision spread quickly among many tribes, but most notably the Lakota in the Dakotas.

Unfortunately, the Indian Agents, Federal Officials, and Army personnel, as well as the local residents viewed the Ghost Dance as a threat. To them, if Wokova preached that the Ghost Dance would stop bullets, then he must also be encouraging an uprising. This is believed to have been a large factor in what occurred at Wounded Knee. 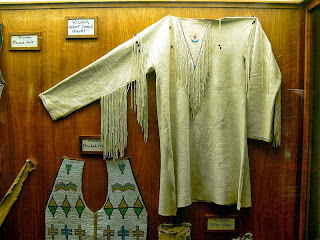 I believe it would be wrong to blame Wokova for the violent reaction to the dance since he made it very clear that he believed in non-violence. It was the mystery involved in the dance that frightened the white men, and the speed with which the cult spread across the country.

Two Miniconjou leaders--Short Bull and Kicking Bear--also emphasized the elimination of the whites when they spread the word of Wovoka's vision, which certainly didn't help, but I wouldn't blame them, either. As I said before, the Wounded Knee Massacre was a horrific tragedy, and all tragedies have many factors leading up to the final event.

I do not know if Wovoka felt responsible for what happened at Wounded Knee, but I feel certain he felt remorse, and though I hope he did not feel guilty, I suppose it is possible that he felt a certain amount of guilt for his involvement in inspiring the people to act in a way that ultimately brought their deaths. I do not believe he was responsible. Wovoka had a dream, and many leaders share their dreams with their people in times of trouble.

Wovoka did not die at the Wounded Knee Massacre. He died on September 20, 1932 and is buried in the Paiute Cemetery in Schurz, Nevada.

I feel kind of stupid for commenting continually...but I love the "emotional thoughts" behind the actual occurrence. Joe

Oh goodness I love the fact that you comment so often. I feel like you're one of my Facebook buddies--we've never met, but we obviously have similar interests and I enjoy reading your opinions and chatting with you. The Old West is very important to me, Joe, and it's comforting to know it's important to others, as well. I am afraid (and I use this word carefully) that the American West is disappearing. I am also an animal activist and following the issues of wolf hunting; horse slaughterhouses; Mustang roundups; wild burro shootings in Big Bend park in Texas; coyote shootings in Albuquerque--our ancestors fought, lived and died to build the American West into something special and unique, something that fascinates people around the world, and it is slowly disappearing. We keep it alive by writing about it, reading about it, talking about it.

Another Blog by another Revisionist, Completely BLAME THE WHITE MAN blog, sadly, tell partial truths in a tainted way, forego telling about the homesteaders that were attacked, raped, killed, mutilated, children's bodies torn and spread all over, no, just BLAME THE WHITEMAN, Sad that the unfortunate and brutal past is not told accurately.

Normally I do not post comments from trolls, but your comment is shockingly unfair, and wrong. I have presented both sides accurately and fairly with carefully documented research and cited my sources. Shame on you for judging years of work based on one post--next time, do your homework, child, and stay off the internet until you learn how to behave.

P.S. Before you even think about defending yourself, consider the fact that everyone who reads your comment will note that you do not even have the guts to use your name. Posting anonymously is the first sign of someone who hides behind his computer spreading hatred because he's so unhappy with his own life that his only pleasure is to attack others. There will be no more anonymous posts on this blog. If you want to spread hatred, racism, and prejudice, start your own blog.